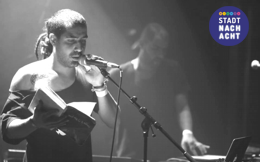 Ayed, 30, is a cultural activist, actor, musician, and film maker from Haifa.  Ayed started being active in his local cultural community at a young age with political activism and working with several ngo’s that aimed to empower Palestinian identity under occupation.  Ayed went on to study cinematography at the Max Stern Academic College of Emek Yizrael and went onto transfer to New York University to complete his academic studies.  After working on several student and community projects abroad including the United States and Dominican Republic, Ayed returned to Haifa and co-founded Jazar Crew, a movement of young cultural activists dedicated to empowering music and culture in Palestine.  This birthed several projects including the Haifa Independent Film Festival which he is an active co-founder of, Fawda Group, and Kabareet Music and Arts Venues.  Moreover, Ayed has been involved in several film productions and has co-starred in the 2016 film, Junction 48. Furthermore he is co-founder of of Stateless Sound, a project for podcasts, bookings and event production and the Harara Record label.