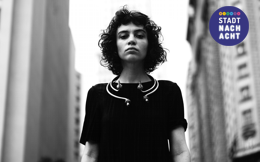 The music of Carolina Schuzter aka Cashu carries a history. The history arises inside a party, with its sensation and hypnotic and nervous narratives. This meditative atmosphere flows among dub techno, techno and house along with percussive elements and paced drum beats. Her music touches the fragility of the body, proposing a mental sound which the sonority is filled by feeling.

Before focusing on her own music, Cashu has been always dialoguing with political and urgent issues of Sao Paulo city. With the aim of occupy and decentralize the scene, she created Mamba Negra, an independent brand that offers experiences of artistic multi languages. The street events that occupy degraded areas and non habited, student and artistic habitations result in self-managed festivals. This group has come in 2013, working on live and organic music. Mamba nowadays has expanded: It’s a group of artistic paths which also works as a musical project, agency, visual intervention dispositor and a label.

In 2015, also created the Virus Radioproject – the online radio of Mamba Negra, a bi weekly broadcast that presents live acts and dj sets, providing support to the local scene and connecting artists from other cities or country that are in the Sao Paulo city. More than 100 artists has participated of Virus Radio.

Cashu has already played with different groups and collectives from other states that occupy, decentralize and hack the Brazilian electronic scene, performing in more that 15 Brazilian cities. She brings that energy to the big clubs and festivals, playing on DIY and warehouse parties and places like Terraza (Florianópolis) and Rio Me Festival (Rio de Janeiro).

Have a drink. And a chat. And listen to some nice tunes!