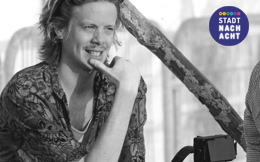 Jan Beddegenoodts is filmmaker and founder of the Cameltown Collective.! In 2012 he was raving and protesting in Israel / Palestine which resulted in his first photobook and documentary: `THE TASTE OF FREEDOM`. Together with Niel Iwens he finished in 2013 the post production from his second documentary `THANK GOD IT`S FRIDAY` a portrait from the Palestinian village Nabi Saleh and the opposite settlement Halamish. Thank God It’s Friday won the first price in Buenos Aires at the biggest human rights film festival of South America and was sold to various television stations worldwide. Afterwards he made Charlie goes to Burningman – a short documentary about an 82 year old professor who goes for the first time to Burningman. Last year Jan Beddegenoodts and the CAMELTOWN crew brought a flying gallery to Europe and beyond. This resulted in There is something about parades. Afterwards he went for a break to Colombia where he made ‘Colombia Dreaming’, a shortfilm about Colombian Performance-artists.