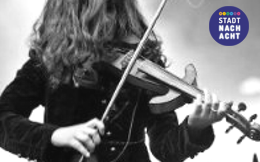 Multi instrumental and music arranger, born in Alexandria in 1987.

In 2005 joined the first all girls band in Egypt Massive Scar Era as a violinist and an arranger and started performing as a guest and session musician with several local and international artists.

Currently touring with the theatre performance ZigZig by the director Laila Soliman with whom collaborated in other projects.

Download link for the presentation by different people  held  during Stadt Nach Acht.