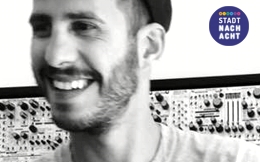 Rojeh Khleif is 29 years old and based between his home town of Haifa and Berlin.

Rojeh is the co-founder of Jazar Crew, an underground collective and the first collaboration of Palestinian DJs, organising parties and music festivals in Haifa, Ramallah and Berlin.

Furthermore he is co-founder of of Stateless Sound, a project for podcasts, bookings and event production and the Harara Record label.