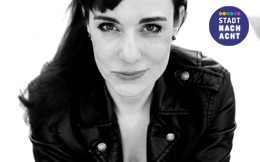 Sabine was born in Berlin and grew up listening to hip hop, soul, funk and crossover beats. In early 2000 she discovered her passion for spinning vinyl after being exposed to electronic music for the first time. She plays techno, electro, deep Chicago house and Detroit house with nuggets of acid, funk and breakbeats rolled in.

But regardless of the style, you will always find Sabine playing vinyl only sets as she prefers the warmth of analog sounds and the classic feel of turntables. She has played at almost all leading clubs in Berlin such as About Blank, Wilde Renate, Berghain Kantine, Griessmühle, IPSE, Farbfernseher, Golden Gate, Fiese Remiese, Chalet, Arena Club and M.I.K.Z to name a few.

Sabine is the founder of “Frauengedeck”. It´s an event series focusing on an all female line up. She wants to support and present female DJs. It already happened at different clubs in Berlin like Wilde Renate, Griessmühle, Farbfernseher and Beate Uwe. It takes place also outside of Germany, the first in Armenia, other country’s will follow soon.

Since 2016 Sabine works at the well known OYE record shop in Berlin. Furthermore Sabine is Booking Agent at Beate Uwe. She finished her Audio Engineering studies at SAE. Inspired by her gained knowledge, she started putting her focus on music production. The first result, a collaboration with No Mad Ronin is available on the label Zaijenroots and is just the beginning of more Sabine Hoffmann releases to come in the near future.